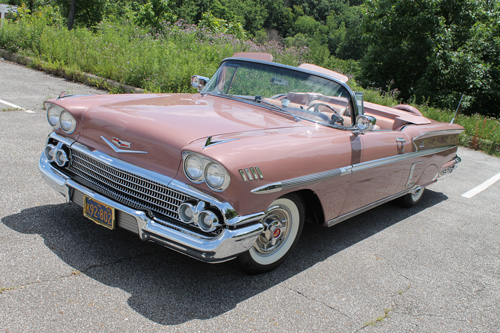 Hard to believe this gorgeous ’58 Impala was once a total basket-case!

Lingering in the shadows of the ’57 Bel Air series for three decades, the 1958 Impala did not really resonate with collector car fans until the late 1990s. It was only then that fans began to take a second look at the Sculpturamic styling, distinctive exterior trim and “luxury lounge” interior of the ’58 Impala. This is true in my case, when, in 1998, my quest for a 1958 Chevy Impala convertible actually began. To digress, my collector car frenzy actually started well before that when, in 1985, I purchased a ’67 Camaro RS/SS convertible. Subsequently, my son, Chris, and I started restoring first-generation Camaros as a hobby. In 1992 and 1995, we finished two fine 1967 Camaros; (a sport coupe and a big-block RS/SS convertible)– both of which are still in my corral. After enjoying the Camaros for a number of years at car shows, I decided I would like to step up to the big body Chevy. It was then that I realized I liked the styling of the ’58 Impala a lot. I began scouring all available ads for a restorable specimen. I soon realized that the ’58 convertible was a scarce commodity.