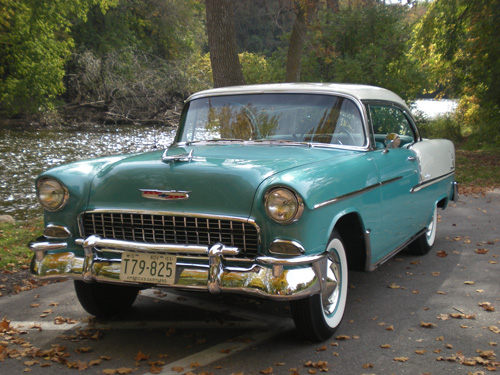 This spectacular ’55 Bel Air was destined for Brian and Robin Ische’s garage.

Our 1955 Chevy Bel Air began its life in Baltimore, MD, and somehow found its way out to California. It is believed that in 1972 the original owner of our car was stopped by the California Highway Patrol and arrested for drunk driving. The car was impounded and sent to the Mojave Desert Auto Wrecking Yard. There, it would be abandoned and parts taken from it for the next five years.

In 1977, Mr. Donald Gaylord was searching that wrecking yard for a 1956 Chevy 2-door hardtop to restore. As he walked through the yard, he found “our” ’55 sitting there, and thought this diamond in the rough would make a really nice car because it was solid and had no rust. He made the decision to purchase the car, and much to his surprise he had to purchase the body and the chassis separately because it was a police impound. Donald owned the car for the next twenty years with the hope to restore it when he retired. As it is with life, ideas change. He moved to Arkansas to pursue a career in politics, and made the decision to sell the car to his cousin, Vernon Gaylord. Vernon and his wife, Verna, brought it back to California. They decided to have the car restored to factory original after rounding up many of the parts.