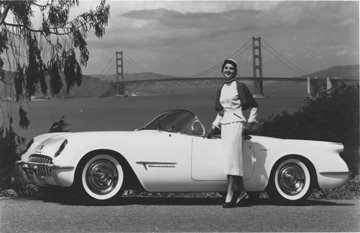 This month’s Chevy Classics magazine features Chevrolet’s “sports car” – the sought-after and unique Corvette. These special collector cars came into the picture in 1953 with the very first Corvette rolling off the assembly line on June 1 of that year. A total of 300 Corvettes were built on the makeshift assembly line in Flint, Michigan in ’53. By December of that year, Corvette assembly was moved to the St Louis facility.

At this time, Harley Earl was GM’s vice president of styling. The newly-introduced 1953 Corvette featured many of the same looks as European sports cars. In 1953-’54 all Corvettes were white with red interiors and were powered by the six-cylinder engine. Harley intented to sell this new Corvette for about $1,200, but in the end, the sale price was just over $3,700.