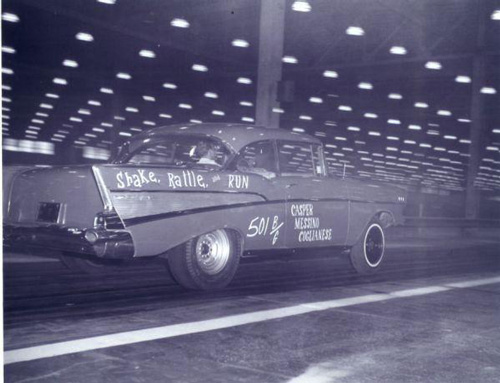 Sunday! Sunday! Sunday! That phrase wouldn’t be used for another six years but, on several Sundays in Chicago, Illinois, indoor drag racing took place. The year was 1962 and Chicago had several very famous drag strips in the area like US 30, Union Grove, and Oswego. But, what was one to do during those cold winter months that we experience up north? Promoters Bill Schade and Carl Bledsoe came up with the idea to host indoor drag racing at the International Amphitheater in Chicago. The Amphitheater, as it was called by locals, was built in 1934 to host international livestock exhibitions and was near the Chicago Stockyards. The Chicago Auto Show was held there, custom and hot rod shows, professional wrestling events, as was the Ringling Brothers Circus, pro basketball games, and numerous music concerts. Elvis performed at the Amphitheater in 1957, as did the Beatles in 1964 during the British Invasion.