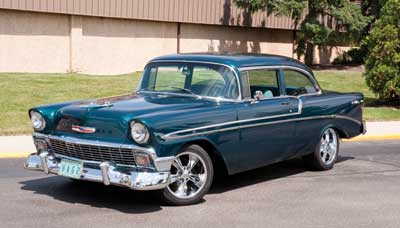 Cover
October 28, 2011May 22, 2019 Eckler's 665 Views
The HAG 2 (Huronia Auto Glass) arrived in Canada from Texas in 1967.  When Norm & Charlene purchased her in Midland, Ontario, she was in pieces.  The pieces were moved to their home in two trailers in 1992.  The restoration process began immediately.   Its five year evolution was delayed by Charlene’s (Norm’s wife) brain surgery. Luckily she survived with flying colors! « Previous Auto/Stop Next » As per Norm’s dreams and desires, manifestation of this ’56 Chevy proceeded as follows: the original 6 cylinder engine was transformed into a 468 turbo block with a 400 turbo transmission, the rear end