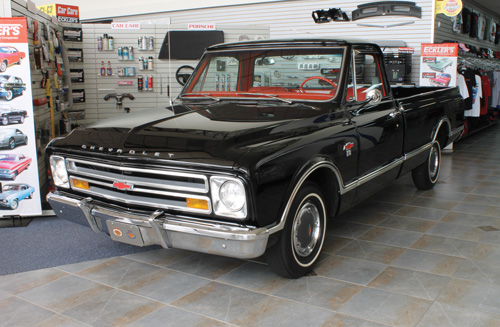 Chris Short’s 1967 could be nicer than Chevrolet ever intended…

In 1996, I was searching for a ’67-’72 Chevrolet pickup that was in good shape to restore. I had an antique Volvo, but really wanted to have a Chevy truck as well. After seeing many rusty or poorly modified trucks, I saw a vague ad in the Orlando Sentinel newspaper for a 1967 Chevy truck– good condition– automatic, garage kept. When I called, the description improved. It had a 327 ci engine and a Turbo 400 transmission, but it was a ¾ ton truck. I wasn’t really interested in a ¾ ton, but the engine and transmission combination made me go take a look at it. When I got there I was excited to see that not only was it a ½ ton but a Custom Sport Truck with all of its special equipment still on it! The cab was very solid where they are usually rusty. It even had 3 of the 4 original full wheel covers still in place. The seller was the nephew of the original owner. Most of its previous life had been spent working at a nursery in the Indianapolis area and it was now used to pull a ski boat in central Florida. With the bright red bucket seat interior, I knew that I had to have this particular truck. As luck would have it, or as a sales ploy, there was another prospective buyer coming to look at the truck after me– so the pressure was on! I quickly paid the asking price and the truck was mine.