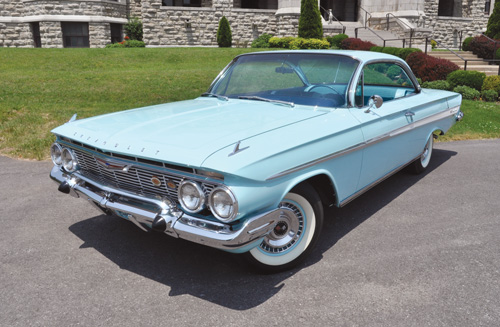 Miss Bubble, this 1961 Impala two-door hardtop, was found near our home. It was sold in Bixby, Ok and found in Broken Arrow. Thanks go to Phill Henry who found the car for me. It has now been 10 years since a total frame off restoration. I bought this Impala from the third owner as a running driving car. At first I thought I would show the car as unrestored. I soon noticed that the stitching on the seats were sun rotted and the car had bad oil leaks. I first thought of painting the car a pearl color and modifying the motor, but after much thought, decided the car was much too complete to not return it to its original condition. The VIN tag shows that this 1961 Impala was built in the St. Louis, MO assembly plant.