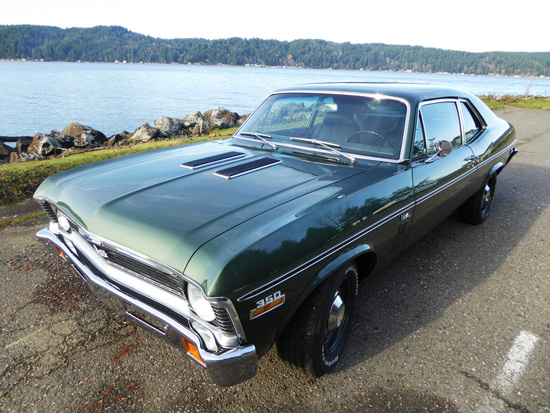 This beautiful 1970 Nova SS has lived its entire life in one family’s care.

I was discharged from active duty in the Air Force in September 1969. Back then I had a ’67 Nova SS that I had purchased a few months prior, and had driven to Omaha, NE, where I finished my active duty tour. Following my discharge, my wife and I returned to our home state of Washington where I got a job and began the transition back to civilian life.

In January of 1970, I ordered my 1970 Nova SS (yes, it’s a one owner car!) from a Chevy dealer in Kent, WA. I ordered it (rather than buy it off the lot) in order to get it exactly the way I wanted it. When I received it in April, I traded the ’67 Nova in on it. The new Nova was our family car, driven daily up until about 1986 when it was last licensed. It made several trips back and forth between Burien (south of Seattle) and Pullman, on the far eastern side of the state, during the 4-1/2 years I attended Washington State University. In 1985 or ’86, I stopped driving the car and bought a more fuel-efficient car to commute back and forth from our home in Puyallup to my job with the Boeing Company in Seattle. The Nova, in need of some repair work, sat for close to 24 years, most of that time in a garage or at least under cover.