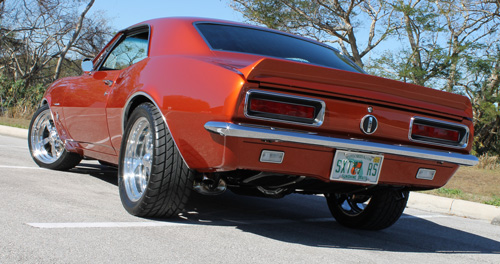 I have had my 1967 Chevy Camaro RS for nine years. I bought it on March 11, 2004 from one of our body shop customers in Jacksonville, FL. He had driven the car for a short while then he took it apart and it stayed that way until I bought it 13 years later. The car looked great and solid in his garage, but when I got it in the light of day I could see it needed a lot more work than I thought. I ended up replacing almost every panel on the car.

From the time I was old enough to think about my own car, working alongside my older brother and my dad in his body shop, I have wanted a first generation Camaro. When I met my wife Debbie, she also loved the ’67 Camaro body style. We almost bought one when we were first married in 1984, but we thought that a home and other financial necessities were more important. So, a lot of years later, we actually purchased the car one month after our 20th wedding anniversary.