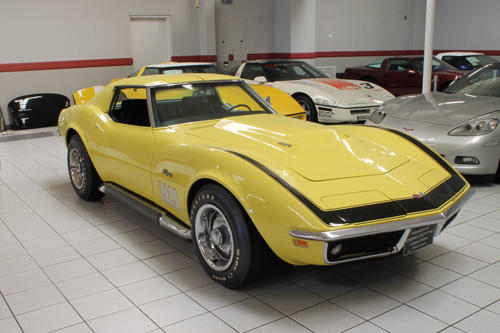 The story of one of the rarest Corvettes ever produced

The next best thing to owning a one-of-a-kind Corvette is owning a two-of-a-kind Corvette. The ZL-1 option package was almost as though GM made a last grand stand salute to the big-blocks before the emission controlled economy cars took over the highways of the 1970s. Mandatory with the L88 special Turbo Jet 427 package was the F41 special purpose suspension, a heavy duty transmission, Posi-traction rear end, transistorized ignition, and a heavy duty braking system. The ZL-1 option consisted merely of an aluminum cylinder block. The combined package added $4100 to the price of the car at the time. The L88 package was a $1100 option and the special ZL-1 aluminum cylinder and case cost an additional $3000, making this combination a big, big ticket in 1969. Only two Corvettes had been factory assembled with this ZL-1 aluminum engine option. That alone is enough to thrill a Corvette owner, but this car’s history turned out to be truly unique. This car was originally ordered as a company car, by the Corvette plant resident engineer in St. Louis– George H. Heberling. His rationale in ordering it was that such a production vehicle would benefit from an evaluation in actual use by one of the plant’s personnel. The car was ordered with all available options, resulting in a sticker price of $10,771.