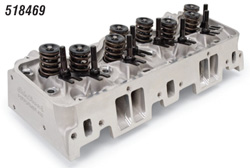 Chevrolet’s first big block was introduced in 1958 in the form of the 348ci W-Series engine. In 1961 the 409 ci big block was introduced – this engine was soon to become a legend on the street. The 409 was short lived however, ending production in 1965. During this relatively short time span the “W” motor made a huge impact on pop culture and the world of hot-rodding. This engine design was ahead of its time, with the combustion chamber being part of the cylinder itself, not the cylinder head. It was a radical design change from the Chevrolet small blocks of the time and with the low mass of the valve train, was able to produce well over 6000 rpms. This, combined with the lots of cubes, powerful dual carb and Tri-power induction systems, and a broad, flat torque curve made the W-Series an instant hit with street racers and hot-rodders.