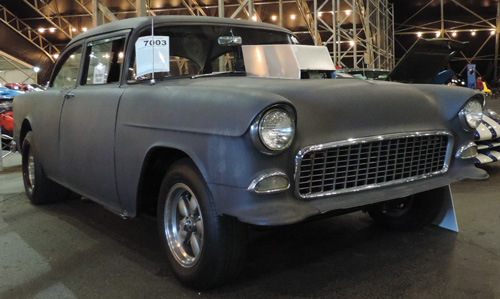 When cult classic movie Two-Lane Blacktop was released in 1971, who could have guessed that a 1955 Chevrolet One-Fifty, which was one of two cars featured in the movie (the other was a 1970 Pontiac GTO), would generate so much interest nearly 45 years later? And at this past January’s Barrett-Jackson auction in Scottsdale, Arizona, one of the three 1955 cars built for that movie would sell for $159,500?

There is a lot of incorrect information about these ’55s and their links to another classic movie, American Graffiti, so first let’s clear up some facts. There were three 1955s built for Two-Lane Blacktop; the first was used when the filmmakers wanted a shot showing the exterior of the car. The second movie car, the interior car, was used when the film shot scenes of the actors inside the car. A third car was built for a final scene and was designed to crash and rollover, but the script was changed and that car was never crashed.